ME and Dame Agatha

It was just the other day that I realized that between stage designs and virtual designs, I have created environments for four titles from the canon of Dame Agatha Christie (one title twice) and have wicked designs on a fifth.

The Mousetrap
1993 - The Bathhouse Theater, Seattle
1999 - Tacoma Little Theatre
(sadly, no photo evidence of either) 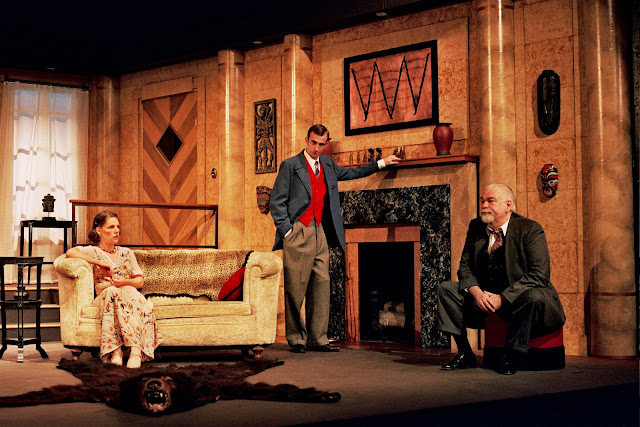 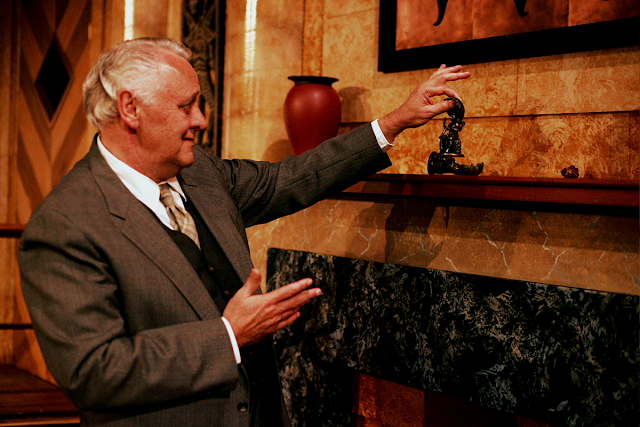 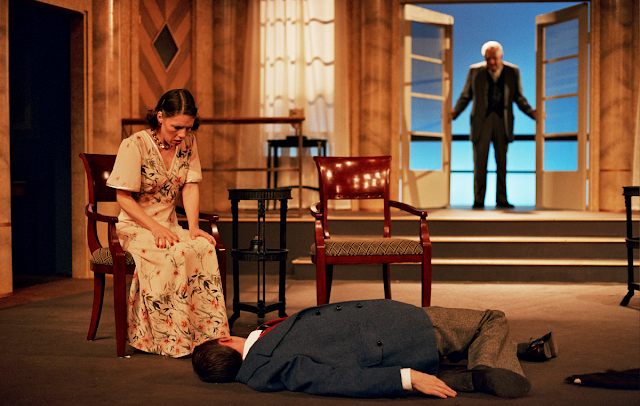 Read more »
Posted by Judith Cullen at 7:17 PM No comments:

Possibly the simplest set i have designed in a long time.  But that's really what the space and the show required - simple elegance, flexibility, and an opportunity for lighting to really push the storytelling. 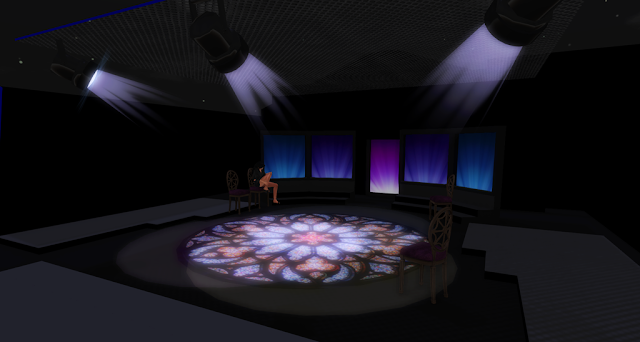 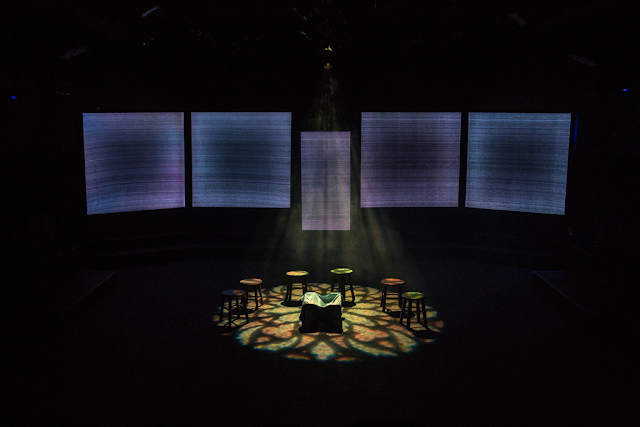 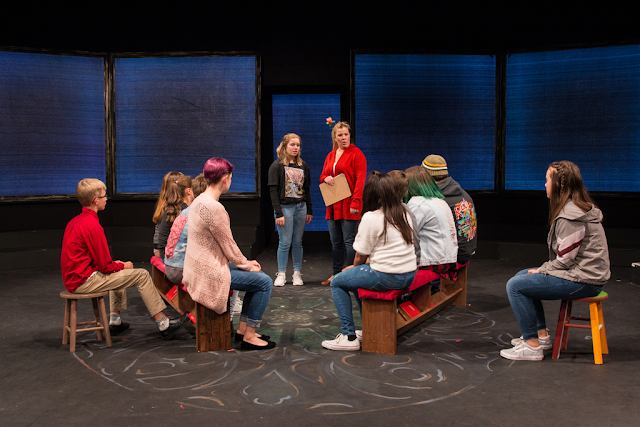 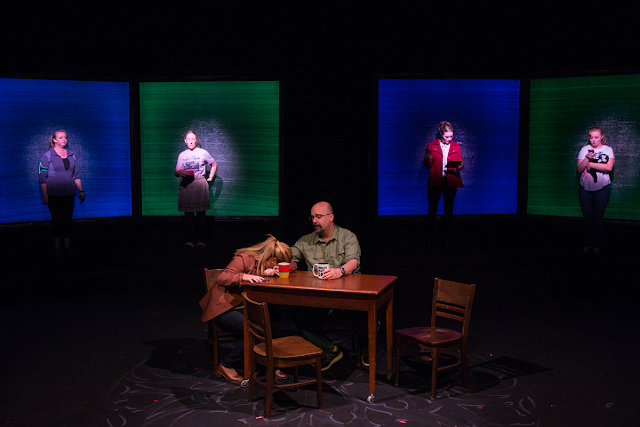 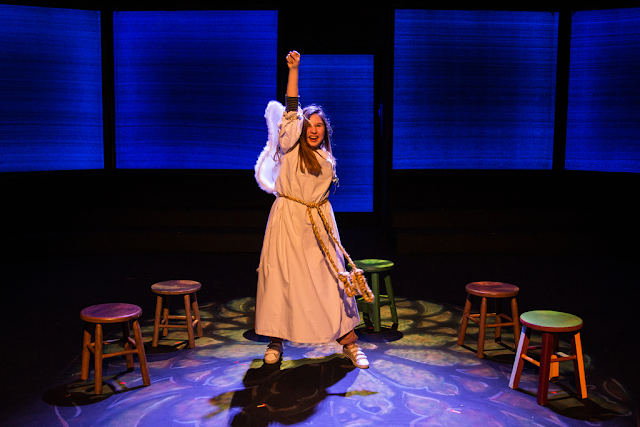 Posted by Judith Cullen at 6:24 PM No comments:

I believe, and many of my colleagues do, that the future of stage design is in digital scenery for a variety of reasons. This show was a further testing ground for that idea, in a context that did not involve a big-box-budget.  And it worked!  The hard scenery was minimal and flexible - providing a frame for the story unfolding.  I created 13 digital backdrops for the show, depicting different seasons, times of day, and subtly following the dramatic arc with certain palette and movement choices.


The video above shows a selection of those backdrops, in the order they appear in the show. Learned a great deal from this experience, am very pleased with how it came out, and eager to apply my new knowledge to another project.

Posted by Judith Cullen at 7:42 PM No comments:

Number one of five this season.  Awaaaay we go!

Show #1: Here is the video footage and snapshots of the virtual model of my design for the season opener for Tacoma Little Theatre's 101st Season: Tim Firth's Calendar Girls.

Click on the individual images. and video embed to enlarge.


The virtual model gives you a really solid sense of the design in its space, and never needs to be dusted!  A media plot is under development to help support the sense of time passing, and the scenes that take place outdoors, on "John's Hill." This model, and the video media that are planned as part of the design, will all be created in the virtual world of Second Life ®. 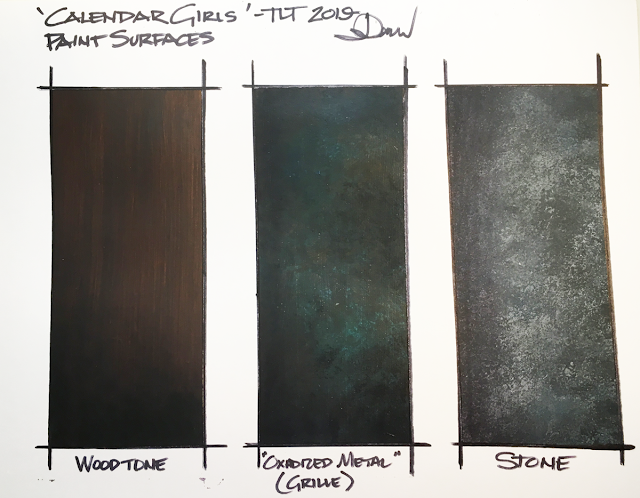 Posted by Judith Cullen at 6:51 PM No comments: 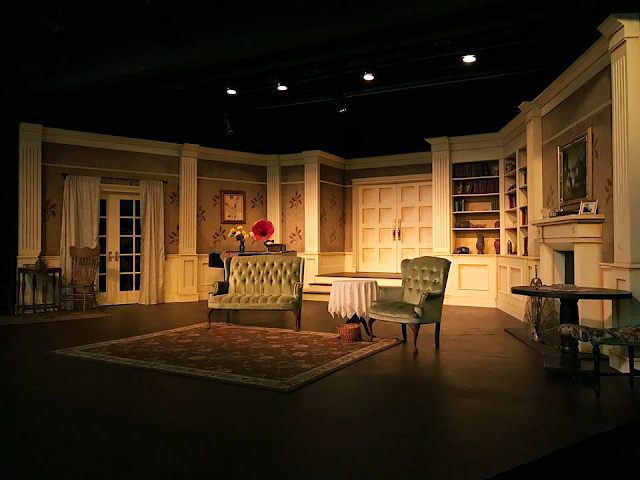 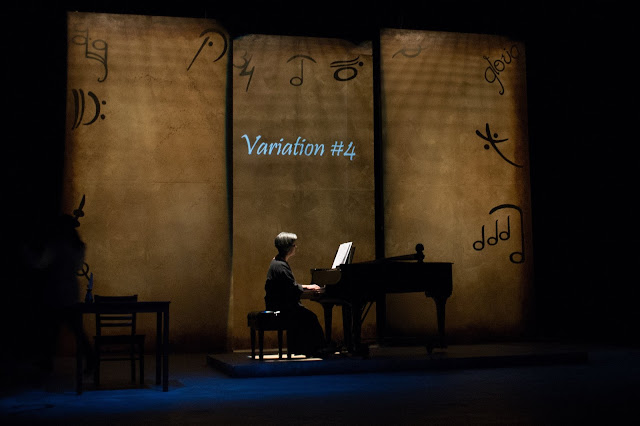 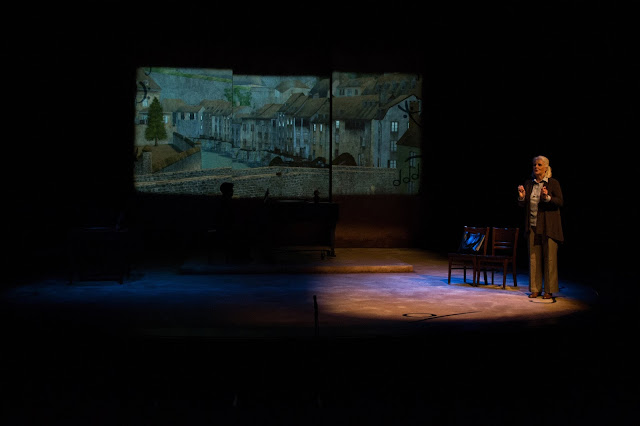 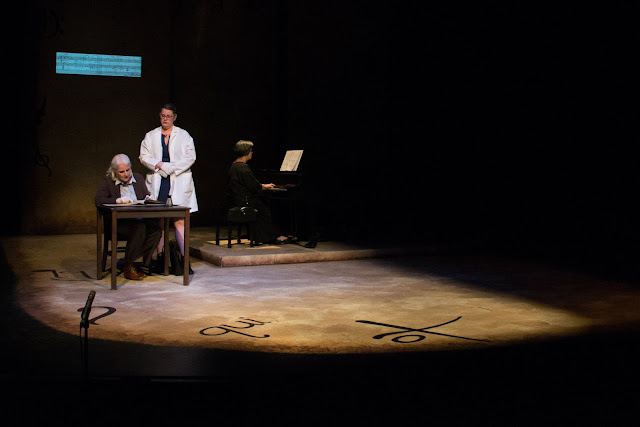 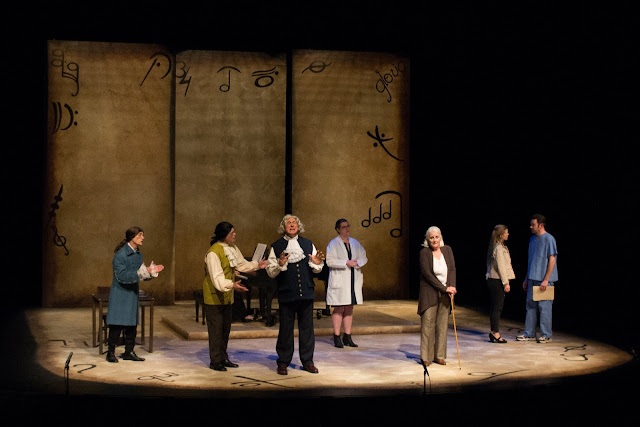 Designed both scenery and projections - Directed by Charlotte Tiencken
Production Photos Courtesy of Lisa Work
Posted by Judith Cullen at 8:06 AM No comments:

An elevation and some work light shots before Opening Night.  Production photos to be posted as soon as possible. 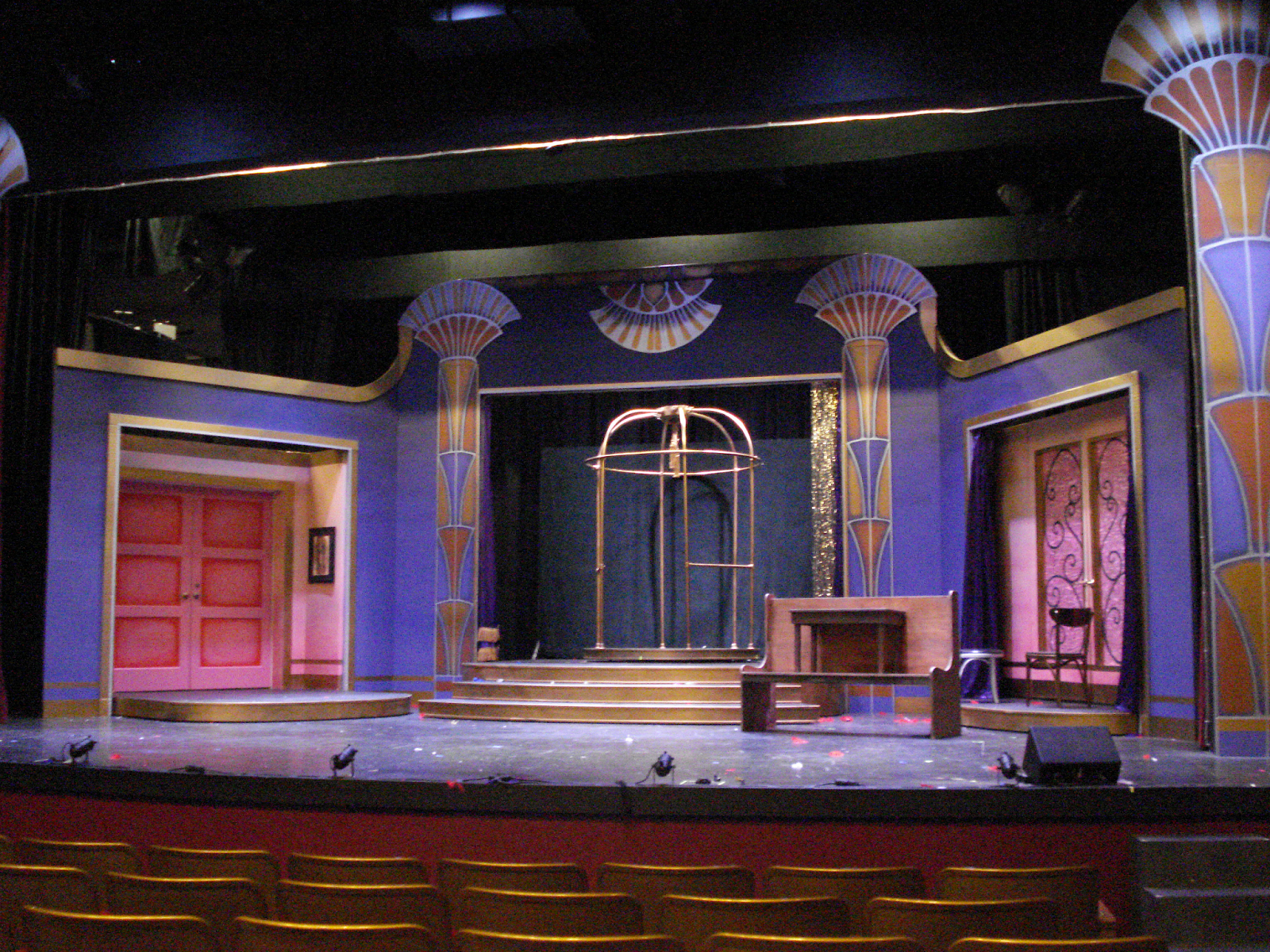 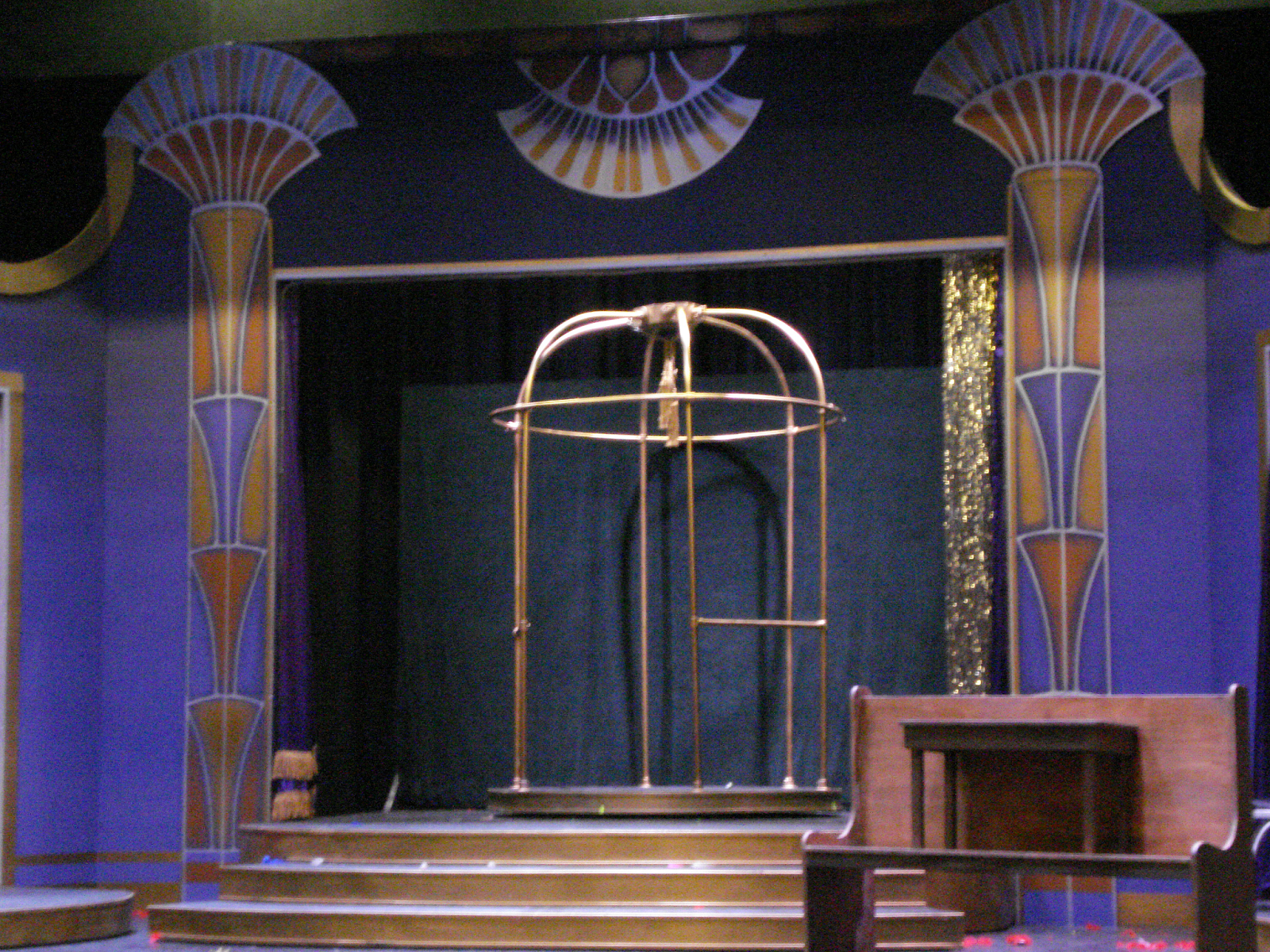 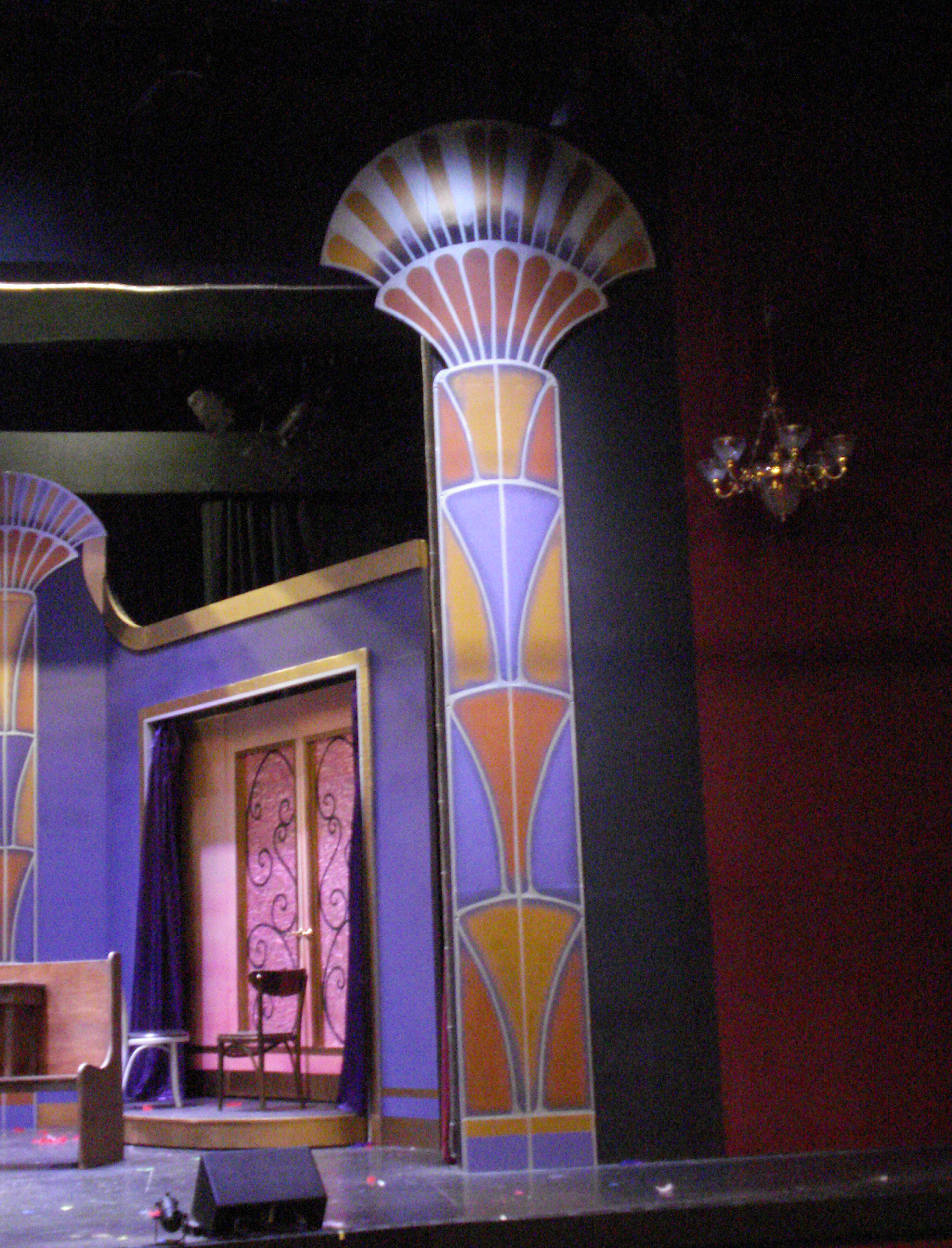 This set was all about a gesture (*extends arm up and out, and flexes wrist*).  It was about a gesture of joy, and of acceptance - embracing the truth of who one really is, and what is really important.  We went for the graphic representation of that gesture, most easily found and expressed through Art Deco.

The show has lots of blurred lines in it: gender, loyalty, morality, love.  Those blurred lines help accent the journey to what is real and important - the lines which should never blur.  So we put Art Deco (where lines seem clear) in an environment where you are never quite sure when you are totally in and totally out of the influence of La Cage Aux Folles.
Posted by Judith Cullen at 2:47 PM No comments:

I can be reached at thedede AT comcast (dot) net . I'd love to hear from you.

About the Designer: JUDITH CULLEN

"Judy" has designed for companies throughout the Northwest including Book-It Repertory Theatre, Tacoma Opera, Tacoma Musical Playhouse, the late Tacoma Actors Guild & Bathhouse Theatres, and Tacoma Little Theatre where she was recognized for her work over a dozen times with the Richard Odlin Award for Outstanding Scenic Design.

RESUME AND PORTFOLIO AVAILABLE UPON REQUEST

IN TACOMA OPERA'S OPENING: THE PARTY JUST GOES ON
". . . intelligent staging from Christopher Nardine, and a moon-and-stars set from Judy Cullen that made the most of the Rialto’s tiny stage . . ."

TMP PRESENTS ITS "BEAST" WITH BEAUTY
"Disney’s 'Beauty and the Beast' at Tacoma Musical Playhouse is simply fabulous. In every way imaginable.

"What makes this show so special is not any one thing. It’s not the star quality of any one or two actors or any particular musical number, but the overall production. It is Judy Cullen’s fabulous sets, Joan Schlegel’s lavish costume designs, John Chenault’s magical lighting, Jon Douglas Rake’s direction and choreography, the orchestra directed by Jeffrey Stvrtecky and the staging of the entire production. It is big, it is elaborate, and the visuals are stunning – especially the rich color choices in the painted backdrops and the castle of the beast."

OPERA VETERANS PUT POLISH ON "PENZANCE" ( at Lakewood Playhouse)
"Judy Cullen once again proves that she is one of the best set designers in the region."